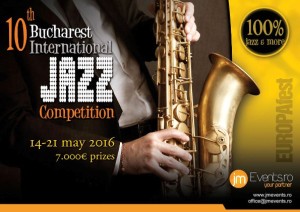 In Bucharest the flowers are blooming, the weather is warming up, and parks are getting busy. Along with spring, many musicians from all over the world are coming to EUROPAfest. The festival, which lasts ten days, is dedicated to jazz and classical music. More than 45 countries are being represented this year, making the event the highest-ranking music festival in Romania.

Concerts, competitions, workshops and a really fancy gala are on the agenda. The purpose of it all? Add a name to the list of cultural events in Bucharest and promote young musicians – that is, musicians under 30 years old. According to the director, a festival like this can give visbility to the good musicians, and put some 7000 euro in their pockets. But that’s another story, isn’t it?

The biggest and baddest comptetition is the Bucharest International Jazz Competition (). Vocalists, instrumentalists and bands can apply and are completely free to choose their repertoire. Rumour has it the jury is extremely fair thanks to very strict criteria. Apart from that, there are many other competitions during the festival (), such as the Jeunesses International Piano Competition Dinu Lipatti, a flute competition, etc.

The festival is in a comptetition of its own however.  Its opposant: the George Enescu festival which also takes place in Bucharest every year in September. Apparently, the directors of the two festivals call each other to brag about their accomplishements, but it’s a secret, so don’t tell. If the George Enescu offers more money to the winners, EUROPAfest welcomes more musicians and nationalities. It’s hard to say who wins in this case.

Moving on to merrier facts: this year, EUROPAfest is at its 23rd edition. Its reputation is increasingly good thanks to two important actors: the Romanian Royal House, and the marvellous team of volunteers. The Royal House, although no longer politically active, involves itself in different cultural events and promotes a variety of brands and institutions. Its feedbacks are quite valuable and give these brands, institutions and events a certain importance… We mean, of course, royalty=fancy people=fancy lifestyle. It’s just how it works.

On the other end of the arena stand the volunteers: a small yet effective group who makes sure everything goes according to plan until the end of the festival. Every year, the volunteers change. The festival provides them with a very professional working experience, which is beneficial especially to high school students who aren’t exactly presented with a lot of volunteering opportunities. First task of the volunteer: preparing the invitation envelopes for the music schools around the world. More than 400 envelopes are sent to the 4 continents 14 months before the festival!

This year, the invitations brought musicians from the U.S.A to Japan, going through Europe and Israel. The tickets are very cheap, and the quality of the music is very good. With the lack of cultural events in Bucharest, EUROPAfest is a shining star. We reckon it’s worth a visit, at least for one day.