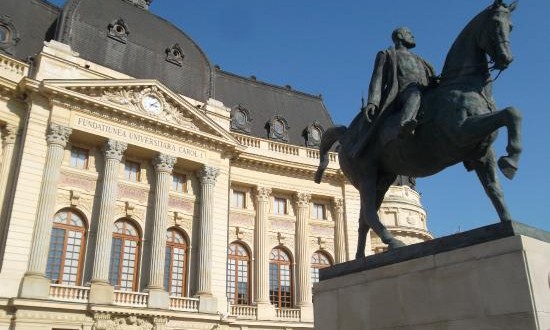 Few visitors in Bucharest will leave without seeing the enormous horseback statue of Carol I – the first king of modern Romania – which stands in front of the University Library in Piata Revolutiei. Looking directly at the former Royal Palace (now the National Art Museum), the statue is one of the largest in the city and unquestionably the most prominently positioned.

He was born Karl Zephyrinus Ludwig of Hohenzollern-Singmaringen in Singmaringen in 1839. Until 1866 he was an officer in the Prussian army when he was asked by Romanian politician Ion Bratianu to become  the nascent country’s king. Romania’s own royal, the authoritarian Prince Alexandru Ioan Cuza, had been exiled after falling out with the country’s politicians and most powerful families earlier in 1866. Scouring Europe for a suitable, non-Romanian replacement, Bratianu sought the advice of Napoleon III-rd, a relative by marriage of the Hohenzollern-Singmaringen family. It was on Napoleon III’s recommendation that the young Karl was approached. Though reluctant, Karl was encouraged by his family to accept the offer, and on 10-th of May 1866, Karl entered Bucharest. News of his arrival had been transmitted trhough telegraph and he was welcomed by a huge crowd. Not yet able to speak Romanian, he took the oath in French, but adopted the Romanian version of his name, Carol.